Of Terriers and Tudors

So in honor of the Scottish terrier winning the Westminster Dog Show Tuesday night here is my Snazzy Dog Collar. Piper loves to wear hers occasionly; and it looks positively stunning against her white fur. Although, her white fur is more like a vanilla-white fur; because when she is outside in the snow the colors are very different. The snow is white, as white as white can get, I guess. Dazzling white, we'll call it. 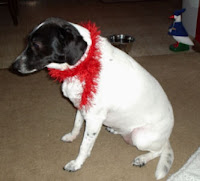 Seriously, it's time for a doggie-diet! And there's Piper looking very disinterested as if to say, "get this thing off of me!" I used a Fun Fur for this one, in the color of your choosing. This pattern is nothing more than an I-cord, which is very easy to make.

With a size 10 needle and 2 strands of yarn held together CO 4 sts.
* Do not turn. Slide sts to opposite end of needle. Take yarn across the back of those sts and
k4; rep from * until collar measures desired length to fit comfortably around your dog's neck.
Add an additional 1" comfort level. Bind off until 1 st is remaining.
Transfer to a crochet hook and chain 8; sl st into same st as beginning chain; bind off. Trim and
sew a button for fun!

Lately I've been reading a book entitled " The Children of Henry VIII", you remember, that fat, let-me-run-through-my-father's-money, basically do-nothing King of England in the 1500's.
The second ruler of the House of Tudor. The least effective of them all, but the one everybody remembers. Sound familiar?

Anyway, once Henry's teenage son, Edward, died a horrible death due to tuberculosis and probably poisoning, that instead of Edward's older sister Mary coming to the throne, it was "arranged" that Lady Jane Grey, granddaughter of Henry VIII's sister Mary, would ascend to the English throne, through much back-door, late-night, skullduggery, not to mention murder, intrigue, and cloak and dagger maneuvers. Just your typical everyday royal finagling. Kind of like Congress in 2010.

Naturally, all of this intrigue was taken care of by Edward's right-hand man; the one who had his uncles imprisoned and executed on all kinds of trumped-up charges, just so he, Northumberland, aka John Dudley, could virtually take over at the royal helm. And for quite some time, he did just that. A man of no integrity, no moral fiber, just a wanton regard for power at its highest and best, if there be such a thing. Working relentlessly behind the scenes for his benefit and his family's enrichment. Kind of like Congress in 2010.

He had Jane Grey declared Queen, but alas, it was to be for a mere nine days. The country knew who was the rightful heir to the throne, namely, Mary, oldest of Henry VIII's children. They loved her, supported her, and stood behind her. Northumberland had even married his youngest son to Jane Grey in an attempt to gain total control over the royal throne. It looked as if it could work; but Northumberland's 15 minutes of fame were over in a hurry. His road to fame drove him straight to being executed.

All that intrigue, all that daily laboring and working towards, . . . what? Glory? Fame? To be King of England? It didn't work then, it won't work now. His time on this earth ran out; just as all of us will find out someday. For centuries, this intriguer, this deadly schemer has been dead, of no more use to the human race. Pompousness is such a lesson in futility.

I saw that for myself last night. I work in a very nice restaurant where now and then there are parties or showers or celebrations that I help out with. It's terribly hard work, but I like it, because it's honest, and staight-forward, and at the end of the day, I can truly say, I work hard for my money.

It was a meeting of so-called business and professional women. They might be better inclined calling themselves, "bitches incorporated." These sort, truly give women a bad name. The entire evening was dedicated to a richly engrossed "me fest", if you will. When one wasn't talking up herself, another one took her place. And on and on we went. They even touched on how earth-shatteringly important they all were to different charities, both local and international, that the world just hasn't been able to do without!

Most of all, I was struck with the preening, above all else. Birds of a feather, surely stick together, and this bunch were made for one another! Through it all, my colleague and I worked hard to bring in plates, and bring out plates, and cater to all their little needs, without the "madam's" having to move a muscle or get up from their esteemed seats. And at the end of the night, not one of them offered a "thank you" or left a small token of their appreciation on the tables. Total depravity, total self-centeredness. Total lunancy.