So, in between looking for work, I have extra time to write and knit. And also to clean cat-boxes, and floors and bathrooms, and dishes, but that's another story; one which we all know about.

Don't you just love it when you go for an interview and "they" never get back to you, ever again? I think, and as the wonderful Mrs. Slocum always said, "and I am unanimous in this", it should be Federal law to reply to all job-seekers who you have interviewed with. It's stressful enough trying to figure out what half these dim-wits are looking for anyway, in the area of their job descriptions, and once I've made the colossal effort of expending my precious time, and even more precious gasoline to go and see them, why, I believe, that's the very least they should be required to do.

Just let me know, one way or the other. Do I have the job or did you give it to someone else? Someone, most likely, most unlikely to fit the bill. But, they are probably more of the age the company is looking for. It's all about image, isn't it? Never mind, the organizational and business skills, I bring to the table. Usually the one hired is hot off of the set of the "Jaywalk All Stars"! That bunch doesn't even know that not only is the Panama Canal in Panama, but there really is a country by that name! As opposed to Suez! Lately, I've yet to see a diplomat from Suez roaming around in Manhattan. Or maybe I'm just not looking in the right places.

Rather than be at the mercy of any of them, you know, those employer types, I just keep plugging away with my knitting projects, and always looking for more. If I had a thousand years left to live, I might just finish everything I want to make! I'm only hoping that the next life looks something like a Barnes & Noble, complete with a tearoom and a cozy fireside corner, all for us enthusiasts called the "knitting-obsessed!" Now that's heaven.

So, in addition to my griping, which is completely deserved and understandable, here is a pretty, pretty scarf! 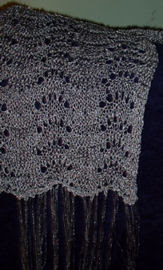 Now, doesn't this just make your heart sing! I knit this in Rowan Lurex yarn, and the color says pewter, but looks definitely silver. Buy 4 balls, 95mm/25g. And the long strings of fringe just make it look absolutely Art-Deco. (There's another term those new hires never heard of either! I'm not explaining it to them.) Use size 10 needles and co 56 sts.

Rep until scarf is about 60" then fringe. Cut 112 sections of yarn 12" long for fringe, and do this first! So, as not to run out. It's just good sense; just like reading an entire pattern is good sense, when looking to knit it. This way you know what to expect as you go, because you've seen it all before. Same goes for recipes. Never cook something new until you've read thru the recipe first. Then you won't be surprised by the goat cheese ingredient that you neglected to purchase, and now all the stores are closed.

But, to get back to my scarf. It is so easy to knit, and will look quite classy once you drape it around your neck when done. Wear something black with it, and you can't lose! Then just stand still and wait for compliments.


Posted by Alice Seidel at 1:46 PM No comments: