Piper, (my husband Bob says we should have named her Pudgy, funny) and I walk most mornings down our gravel road to another connecting gravel road where homes are far from the road, either up hills or hidden by trees. Vales of ferns dot empty woods; empty of houses that is, and humans. Wildlife abounds, as I see almost daily.
Wild turkeys preening and parading their feathers, shy momma deer with their white-dotted babies growing bigger every day, frogs, turtles, squirrels, dragonflies, hummingbirds, warblers, robins, crows, woodpeckers, chipmunks, grasshoppers, spiders, crickets, eagles, hawks, to name a few, and even this guy crossing under my car a few days ago. The picture is a bit blurred, but he really is a snail, slugging along at a snails pace! About half an hour after I took this picture, I went out to check on where the snail was, and he was gone into the grass beside my house. Invisible to me!

But, the days are slow in late July, for we truly are deep in summer. Everything is lush and green, with no indication of rot, or shrivel. The only thing that is changed is now it's dark at 8:30 instead of 9:00 or later. And mornings are not as bright at 5 a.m.; in fact, they're downright dark! The seasons have their seasons, and so it goes. 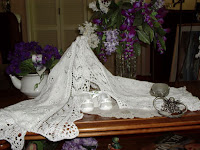 Looks a lot like the real thing, Queen Anne's lace. Right now, they are in abundance all over the place, and will be until the first hard frost.

Here are my third set of placemats, which I knitted in Sugar n Cream Hot Green. A very pretty color. I used 2 skeins, and size 5 needles. This picture is not as nice as I'd like, but when you knit your own, you'll see how nice they really are! The pattern follows.

Repeat Rows 1- 10 until placemat measures approx. 12" from cast on edge. Bind off and weave in all stitches. Block.

I love making placemats, dishcloths, scarves, afghans, and curtains, to give as Christmas gifts. Now is the time to start thinking about that!
Sunday is August. 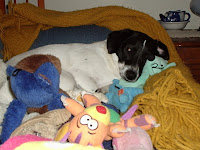 It's the dog days. Time to rest up!

Posted by Alice Seidel at 2:54 PM No comments: