I just adore the closing line to the movie, "Now, Voyager". Taking the cigarette from his mouth along with his own, Jerry gently offers it to Charlotte. Quietly, they both stand there before the open french doors, with curtains softly blowing, and the night sky just beyond them. Charlotte, her own woman at last, has Jerry's daughter Tina to love, but Jerry asks, "and will you be happy, Charlotte?" Looking heaven-ward Charlotte speaks for both of them when she says, "Oh Jerry, don't let's ask for the moon. We have the stars."


And so it was for me on any sultry summer night last year, when with Chels in hand I would wander up to the gravel road in front of our house and in the dark, look up into the heavens. And wonder. And be wondrous. Of all I had. Of all I am. Of all I still so much want in this life.


It's been a long, hard 8 months since those days, but they will come again. Of that fact I have no doubt! It's true, don't you know, that you will walk through fire now and then; so better be prepared for it. With faith, you will make it through. I can't say what it would be without faith; I've never tried it, and I never will.


Yet, this time, when I walk up the driveway to the gravel road in front of our house and look up into the dark, Chels won't be by my side. For late in March, she died suddenly; in no pain,with no warning, just what we think was a heart-attack or seizure, and she was gone. Just like that. For all time.


She was a 12-year old dalmatian. She was and will remain, the love of our lives, our girlie-girlie, our pupper, our baby-girl. How many silly little names we had for her; and she loved every one!

I remember the day in 1995 when we went to O'Neill's Kennels in West Windsor, NJ and saw an entire bin of dalmatians, just in from the breeder. Although she was not "purebred", Chels was beyond perfect for us. She was hanging out in the back with her little head resting on a brother or sister; I could see those three black dots on the right side of her nose as clear as day.
By the time she was 4-months old, she was housebroken; I never knew a smarter dog in all my life! She could be stubborn in true dalmatian fashion; but I swear she understood English better than most people I know.

So many things she loved to do. Simple things; lovable things. Shouldn't that be telling all of us something? Now, I'm not advocating riding in a car with our heads out the window, but it was sheer heaven to her! As well as those long walks around the lake, and most nights, around the neighborhood, after dark.

There was cuddling on the couch, jumping full-speed ahead onto our laziboys; coming at you from all different angles, all with the same intent in mind, to land in your lap and kiss your face!
She just loved getting her ears rubbed and when it rained hard, she couldn't wait to get toweled off; especially around her head. It must have felt so good! When it was very cold, she would snuggle on the middle cushion of our couch, sleeping contentedly under her blue afghan. When she had settled down, whether there or on the bed, she would sigh deeply, and you knew, all was right with Chelsea's world. Tongue flicking in and out, she would lull herself to sleep, to dream, kicking and barking as she slept.

We took her everywhere we could. Little trips to town or the bank; trips down to see our kids, or relatives in NY or NJ or just anywhere at all. She loved the car!

There were times when her left ear would flap up at the middle crease; it was a funny sight indeed. I tried to capture it in pictures but they could never do the real thing justice. And she would leave it that way for awhile, as if she knew we were amused by this, and allowed us our fun. Then with a typical dalmatian shake of the head, it would be gone!

She loved chicken mixed in with her food; those Alpo sticks, which she would eat every morning and pigs ears! Oh boy, pigs ears! No dog loved them more. She loved watching TV. Especially other dogs in the dog shows. When she was very young, she would sit with you in the chair and watch these dogs taking their turns in the arena; hopping and bopping all around. Then, she couldn't take it anymore and would fly off the seat and charge to the tv screen, looking for this dog, for after all, he had to be there somewhere! Over and over again, year after year, and it was always so funny!

As the years went by, Chels tempered so many disappointments. She survived Cindy and Smokey, our two kitties, who grew old and died in their times. She was always a healthy specimen of a dog; always went to the vet yearly, and was almost always never sick.
She could stalk squirrels in the backyard; in fact, one of them used to wait for her on the fence near the back door and dare her to catch him. Stupid squirrel! There were times she came close! Then she would charge around the yard, with the biggest stick she could find. You could fling it from one side of the yard to the other and she would just keep going.

She was very afraid of fireworks and thunderstorms. And no amount of talking soothingly to her would help. But, she loved to walk along the beach at Lake Carasaljo, tripping happily through the water. She loved water! Had some kind of fascination with it, especially if it was running or in a waterfall configuration.

Then there were all her toys. Her stuffed dalmatians and the other decorative ones. There was her squirrel and little pink pig, and Marty's bunny, which my mom had given her after Marty died. And, last, but not least, there was Squeak. Just a little stuffed dog-head, but almost akin to her puppy. She loved Squeak!! We took it, along with her blanket, any time we went visiting. She had her fancy bed, too, from L.L. Bean, with her name on it and everything! 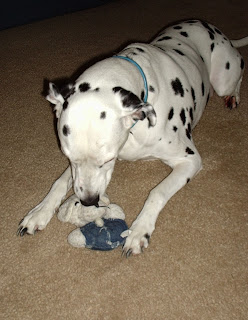 One month ago on March 26, it was Wednesday and I was working in a job that I thought would become full time. Bob was working and finally, I thought, we can get our heads above water, can have some extra money, can begin to lift out of this mire, which we have been in for too long now. Chels seemed tired that morning; she had not eaten and was laying on her bed when I left for work, but when I came home for lunch she was ok. She was out in the back and didn't know I was home yet; I watched her lumber up the deck steps, slowly, bringing her little back feet up almost together as she had learned to do in her old age. She looked out the railing slats into the backyard for a long time, I remember, and then headed to the back door when she spotted me there. Her face changed, and if a dog can smile, she was smiling! She had 2 hotdogs for lunch and then shared my beef stew, right off the fork, when I ate. I kissed her on her head when I left and told her I would see her after work. I left her there looking at me in the kitchen and she was fine.
One hour later she was gone.

It's taken me all this time to just say that. Happiness is fleeting; Charlotte Vale knew that. Take what you have, immerse in it, let it be absorbed into your being, because one day, it will all be just a memory.

Now, when I look at the stars, my Chels will be looking back at me. And she will be smiling, just like she always did; and I will smile back. And the stars will know.
Posted by Alice Seidel at 6:13 PM No comments: