The Craft of Knitting

Whenever I knit something new, or
think about all the projects that are still
on the "back-burner", the one thing I
never think about is where did this all
begin?

As of right now, it is thought that knitting
came along sometime in the late Middle
Ages, 1200-1500 A.D. It was brought
into Egypt by nomads, and from there,
carried into lower Europe by way of
Spain. Once there, knitting traveled all
over the European continent.

During the Renaissance, craft guilds were
all the rage, and knitting was established
as a true craft. After all, once the art of
spinning created yarn, then innovative
ways to use the yarn came along.

Different areas of Europe invented
different modes of knitting. The Fair
Isles, a group of islands north of Britain,
give us Fair Isle knitting, one which is
characteristic of knitting with many
colors, and changing colors frequently.

Intricate lace patterns are indicative of
France; fishing communities off the coast
of England gave us the Guernsey style.
Both of these types of knitting are quite
intricate, and the latter very colorful.

Of course, knitting found its way to our
world as well. During the Civil War, both
sides took to producing much needed
items for the soldiers. It was here that
knitting became linked to patriotism; a
link which has only grown stronger over
time.

Once the Industrial Revolution came
along, knitting machines were able to
produce what hand-knitters never could.

Yet, with all the modern innovations
which we live with, there is nothing
quite like settling in with needles, yarn,
and a good pattern. Add some friends,
a sprinkling of good conversation, and
the beautiful world of knitting, is a place
you could live in forever!

Nowadays, we have not only our families,
and friends to knit for. There are so many
needy causes and organizations out there just
looking for a little "hands-on" help.

The Old English definition of the word
"craft" tells us that the word meant
"strength". As we knitters well know,
in learning, enjoying, and passing on,
our beloved craft, therein lies knitting's
strength.

The Shakers certainly had it right when
they said, "Hands to work, hearts to God."
Posted by Alice Seidel at 12:18 PM 10 comments:

Hi all my knitting enthusiasts,


Even if you don't celebrate Thanksgiving, I do, and I am thankful for you!
I am just sending along my "Happy Thanksgiving" to everyone!

Here's to turkey, and pumpkin pie, and everything in-between! And keep a lookout for Friday's newsletter.

Here is a pretty pattern for a warm Fall scarf, I just thought I would pass along:
I think the golds and dark red are just perfect for this time of year. This scarf was knitted
with nothing more than knits, purls, yo's, and k2tog's. Easy to do, you can finish it in
days! 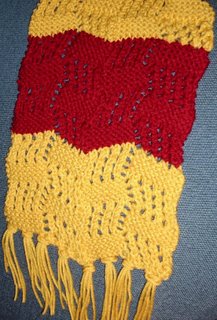 Here's the pattern:
Use worsted, wool or sport weight yarn.
With size 7 or larger (no larger than 10.5) needles,
CO 34 stitches.

Repeat rows 1 - 16 until desired length. BO.
I did 32 rows of each color and then switched to the alternate color. It is a very
pretty pattern, and looks great however you knit it!

Now, here's 3 cute little guys! (Or gals!) They were a hit at the craft fair, and I have these three left over. If anyone would like to buy, they are $15. each. They are cuter in person, and would make a wonderful gift for a little one!
Just email me at The Knit Stitch! 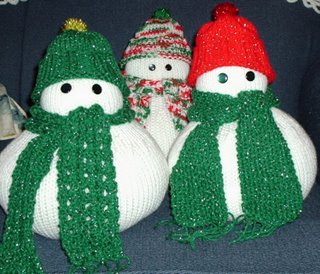 Have a happy Thanksgiving, and a great week!
Posted by Alice Seidel at 3:02 PM No comments:

Without us even realizing it, November is quickly passing us by! If you are truly stumped as to what to give everyone this Christmas, fear not! I am here with some knitting suggestions.
In my three previous articles, I have given you some ideas for scarves, ribbon bracelets, and placemats. Just these simple patterns, can be transformed into dozens of one-of-a-kind knitting creations! In fact, you could outfit the entire family and close friends, with some of the nicest gifts they will ever receive!
And to add to our collection, this article will be about knitting baby washcloths. Usually, whenever we think about baby gifts, it is off to the mall we go, to find the latest in infant accessories.But, did you know, you can knit your own baby creations? They will be as soft and cuddly as anything you can find in a store, and, best of all, will be made with love!
Knitting baby items are just so easy to do, and so unexpected!Traditionally, when putting together gifts for baby, the first things you think about are layettes, blankets, and booties. So, now it is time to expand on this theme.
Whenever I knit anything for babies, I love the yarn to be soft and pliable. For washcloths, use a cotton yarn. They are totally washable, and will hold up nicely.
In a few stores, I have also seen terrycloth yarn, which is another great idea for baby items. But, for the baby washcloths that I knit up, the cotton yarn is the best yarn to use. Sugar n Cream, Peaches n Cream or Cotton Tots are my recommendations for the best cotton yarn to knit with.
Use a size 6 straight needle, and, really, no gauge is necessary. Here is the pattern:
Baby Washcloth
Cast on 37 stitches.
Knit four rows.
Rows 1 and 5 (RS): K5, *p3, k5; repeat from * to end.Rows 2 and 4 : P5, *k3, p5; repeat from * to end.Row 3: K5, *p1, yo, p2tog, k5; repeat from * to end.Row 6: Purl.Rows 7 and 11: K1, *p3, k5; repeat from * , end last repeat k1.Rows 8 and 10: P1, *k3, p5; repeat from * end last repeat p1.Row 9: K1, *p1, yo, p2tog, k5; repeat from * , end last repeat k1.Row 12: Purl.
Repeat these 12 rows 4 or 5 times more, until desired length.
Knit four rows. Bind off all stitches.
There you have it, simple, yet very unique, and sure to please! And, with all the colors and color combinations you will have a blast knitting baby washcloths for little nieces and nephews, your friends and all babies-in-waiting! Gifts such as these, are always appreciated, and combine them with baby bottles, rattles, toys, or receiving blankets, and you will have a winner every time!
Remember, we have one more 'easy-as-pie knitting gift' to go, and you will love it! 'Til next week, get knitting!